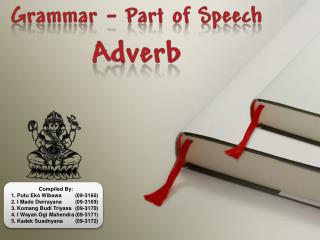 HADITH AS AN ELABORATION OF QUR AN - Major collections of hadith. the sunni collections:sahih al-bukhari (compiled by

Review of Atomic Theory - . a powerpoint compiled by the best chemistry teacher ever, mr soltmann, and created by his

Mesoamericans in the Modern Era Compiled by Brad R Huber - Special thanks to carmack, gasco, and gossen’s the legacy

Compiled by Leesa Hubbard - Lunar expressions. compiled by leesa hubbard. i like to think that the moon is there even if