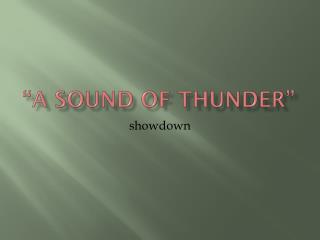 “A Sound of Thunder” “A Sound of Thunder”

Baal, God of thunder - . facts about b aal. baal was the egyptian god of the sky, clouds, tempests, thunder and war.

A Sound of Thunder - . by ray bradbury. time safari, inc. safaris to any year in the past. you name the animal. we take

“A Sound of Thunder” by Ray Bradbury - . background information “ who controls the past controls the future”-

Thunder Storms - . mandek richardson stars university of south florida. what is a thunderstorm. thunderstorm is a form

Roll of Thunder - . setting. 1930s , the logan homestead in rural mississippi , an area of huge cotton plantations a nd

THUNDER GAMES - . by phillip burley. slogan. the games of gods. hours. monday-friday from 7am-10pm weekends from

John, Son of Thunder - They were both righteous before god . john, son of thunder. 2 kings 18:2 hezekiah =strengthened of

Thunder Rose - . day 2. concept talk. how can nature challenge us?. anchored talk. what types of natural disasters might

Roll of Thunder project - . by: sarah r ichardson. theme . the theme is to:treat others the way you want to be treated. Scientific Background for “Sound of Thunder” - . “a sound of thunder” by ray bradbury. paradox. a statement that

Thunder Cake - By: patricia polacco. thunder cake. vocabulary review. directions: pick the answer that you feel is the

A Sound of Thunder Quiz - . short answer. what type of government does deutsher represent? why can’t the hunters go off

Sound of Thunder - . big picture. speaking &amp; listening. you will be able to: listen for and recall the main