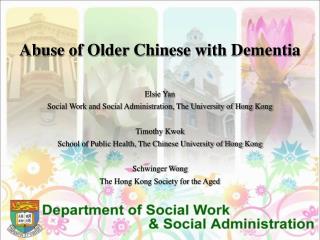 The Abuse of Older Men - . jordan i. kosberg, ph.d., acsw university of alabama endowed chair of social work school of

What is the abuse of older adults ? - . a single, or repeated act, or lack of appropriate action, occurring within any

Older People and Domestic Abuse - . it needs to stop. the audition. patrick stewart and joanna lumley in ‘the

Dancing with dementia - . christine boden. a roller-coaster ride. i began studies in counseling struggling, but doing

Living with Dementia - . dementia. progressive chronic disease that primarily effects the brain and will sometimes cause

People with dementia - . definitio n. what is dementia? dementia is a set of symptoms which effect the function of the