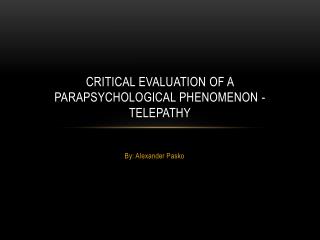 Critical Evaluation of a Parapsychological Phenomenon - Telepathy. By: Alexander Pasko. Think about Parapsychology……. Why Study Parapsychology?. Knowledge is progress Rewards are incredible To uncover the truth People want to believe. Initial Studies of Telepathy. TELEPATHY - . what is telepathy?. it i s the supposed transmission of information from one person to another without

Example: Critical Evaluation of a Paper - . barthe et al. (2009) dynamic and structural characterization of a bacterial

Critical evaluation - . on the web. what is the website about?. a product, an animal, a service, something else. what is

Critical Evaluation of Resources - . information literacy workshop everything you wanted to know about teaching

All About Telepathy - Telepathy is a very familiar tune, never out of style; we feel the rhyme in our daily life.

A Strange Phenomenon - . there is a type of unstable particles called muon . they are produced in the upper atmosphere 14

Task: A Critical Evaluation of a Specific ‘ Lecture ’ in Criminology - . by joel chijioke nwalozie. description and