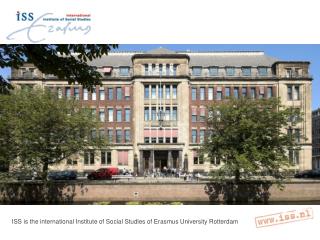 Monterey Institute Of International Studies - Nuclear non-proliferation treaty: a regime in need of intensive care by

FORECASTING COVARIANCE MATRICES FOR ASSET ALLOCATION - . robert engle and riccardo colacito. the setting. this paper is

Desiderius Erasmus - . desiderius erasmus. born in rotterdam about 1466 died 1536. he was raised a dutch roman catholic.

ISS is the international Institute of Social Studies of Erasmus University Rotterdam - . the informal economy and the

Indigenous Peoples: Always at the bottom - . socio economic participation of minorities in relation to the right to