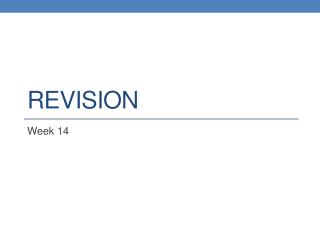 Revision . Week 14. Chapter One What is Language? . Linguistic Knowledge . When you know a language… Language is much more than speech. How? Deaf people use sing language, and express meaning only the manner and modality is different from spoken language. Revision! - . how can we help?. revision technique. didn’t bother to revise ?. how do you revise?. read through

Revision - . b1. what is dna?. they consist of long strands of a substance called deoxyribonucleic acid, or dna for

Revision - . hbs3b. structure of the paper. section one - multiple-choice – 20 questions – 40 marks answer all the

Revision - . if an acid is added to a strong base, what happens to the base? what is neutralisation? what are the two

Revision - . elasticity &amp; it’s importance. what is price elasticity?. the responsiveness of one variable to

Revision - . unit b6 urban environments . where to find things. http://newigcsenotes.wikispaces.com/6+urban+environments

Revision - . or, no one runs the play perfectly the first time…. what does it mean to revise?. revision literally means

Revision - . ‘ rapunzstiltskin ’ liz lochhead. quotations. on the next page there are a list of quotations. you

Revision - . the attributive clause. 定语从句. liu jin. she is a lovely girl who is good at high jump. it is a book