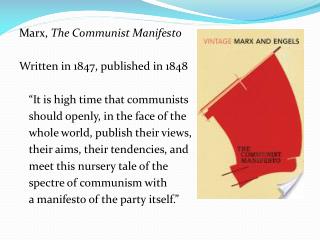 Marx, The Communist Manifesto Written in 1847, published in 1848 “It is high time that communists should openly, in the face of the whole world, publish their views, their aims, their tendencies, and meet this nursery tale of the spectre of communism with Economics and the Industrial Revolution - Adam smith. he made the book a wealth of nations. he believed is

Where do we go from here? Building a policy agenda for new times - . marcus roberts director of policy and membership

What is Communism? - . this is the symbol of communism – the hammer and the sickle. hammer for the workers. sickle for

Jesus Christ`s Manifesto - . as set out in his parables and parabolic illustrations. spiritos accumilatos. manifesto

Composing the Writer’s Manifesto - . creative writing prof. kirsten ogden. remember. there is no wrong way to do the

Animal Farm Characters - . mr. jones. original owner of manor farm farm suffers under his incompetence the last of the

The Evangeline - . by ian, rj, and john. the background. this is an epic poem written by henry wadsworth longfellow in

Anything but Communism - . fear. stop the spread of communism house un-american activities committee movies-commies are

Economics for Democratic Socialism - . drexel university spring quarter 2009. why this course?. the economic crisis of