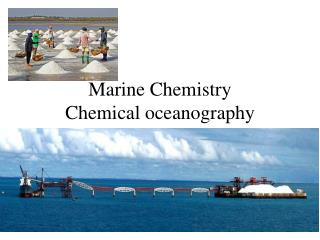 Chemical Oceanography - . understanding the distribution, fluxes and transformations of chemicals in the sea. the ecology

Introduction to Oceanography - . dr. marianne e. mcnamara. first, an icebreaker…. your major your year/part time or

Ocean Water Chemistry - . chap 14, sec 4. essential questions:. how salty is ocean water? why is the ocean salty? why

Chemical Oceanography - . ana aguilar islas by: katy. why are trace metals in the ocean so important? what could be in

Chapter 7 Ocean Chemistry - . about solutions and mixtures a solution is made of two components, with uniform (meaning

Marine Chemistry and Sediments Test Review - . oceanography. what is the forchhammer’s principle? . the saturation

Ocean Chemistry - . unit 5. ocean chemistry. the chemical properties of the ocean are important to understand because the

WHAT CAN I DO WITH A MAJOR IN... MARINE SCIENCE - . www.sc.edu/career. ma·rine sci·ence. the study of the ocean, its

What is Oceanography - . list thoughts…. and the answer is…. basically the study of all aspects of the physics,