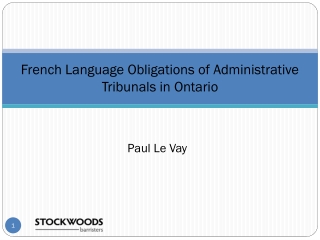 French Language Obligations of Administrative Tribunals in Ontario. Paul Le Vay. French Language Services Act. Preamble Acknowledges the historic and honoured status of the French language in Ontario; French is an official language in the courts and in education in the province; French language course in French Language School - Among remote nations working together in the us, france utilizes the

Tribunals - Introduction. tribunals are bodies with judicial functions usually set up by statute but existing outside the

Tribunals - . b y lisa incledon. tribunals. limited jurisdiction to deal with a particular area of the law decisions

Tribunals - . introduction. tribunals are bodies with judicial functions usually set up by statute but existing outside

In the Tribunals - . case 1: jones v cpe (fwa) case 2: the board of bendigo regional institute of tafe and barclay and

French Language Course in Kolkata - Join our leading french training institute if you want to learn foreign languages. we

The French Language in England - . rollo (göngu-hrólfur) the normans. 1066. william the conqueror. the main linguistic