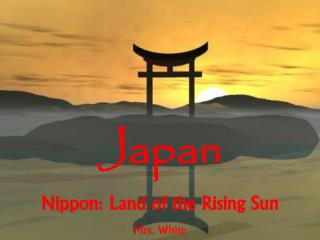 Japan Nippon: Land of the Rising Sun Mrs. White. Geography. Archipelago- with over 3000 islands. 4 main islands: Honshu, Hokkaido, Kyushu & Shikoku 9 regions & 47 prefectures Only 20% of the land is suitable for farming. January 2010. Misawa gets about 12 feet of snow yearly. The Last Frontier, The Land of the Midnight Sun

To the Land of the rising sun! - . national flag: known as the hinomaru, the flag depicts the sun as a red ball against a

Japan (Nippon) - . &quot;land of the rising sun&quot; - the first major country to see the sun rise each day.

Land of the Rising Sun - In the beginning, there was emptiness. then heaven and earth began to separate and two gods

The Land of the Rising Sun - . topics to know about japan:. bunraku theatre —deals with manipulating puppets that are

Sweden The Land of the Midnight Sun - . sweden’s flag the capital of sweden is stockholm.