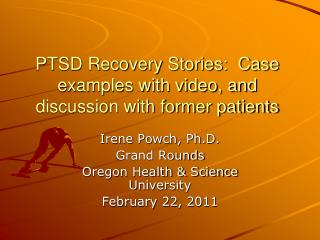 Video Concepts Case - . by rosemary, megan, ashley, and charles. overview of part 1. our assessment of chad rowan as a

What Is Recovery? - . let’s really change the conversation about addiction and recovery. this is a call for the

7 Jan - . opening question: welcome back! check out the new calendar for the next three weeks. agenda: intro to unit 6