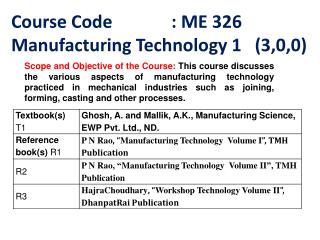 Course Code : ME 326 Manufacturing Technology 1 (3,0,0). Scope and Objective of the Course: This course discusses the various aspects of manufacturing technology practiced in mechanical industries such as joining, forming, casting and other processes. Casting Terms.