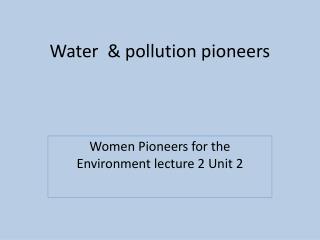 Water & pollution pioneers. Women Pioneers for the Environment lecture 2 Unit 2. Ellen Swallow (1842-1911). 1870 – applied MIT, 1 st woman free so no one would think she was actually a student Graduated from Vasser Poor, tutored to pay for classes at vasser

WATER POLLUTION - . by sarah fluney. what is water

Water pollution - . by: joseph. you can help. if you want to help keep our waters clean, there are many things you can do

Water Pollution - . by: isabella iacona, micaiah battle, and rebecca freedman. what is the problem?. if the the pollution

Water Pollution - . water pollution can come from a number of different sources. if the pollution comes from a single

Water Pollution - . the problem. humans use water bodies as an easy way to get rid of waste. what happens to waste in