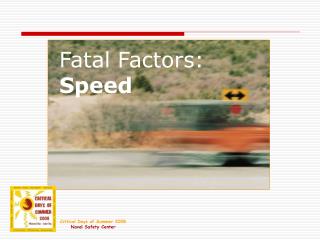 Critical Days of Summer 2008 Naval Safety Center. Fatal Factors: Speed. The Problem. In about a third of all the wrecks that kill someone, at least one of the drivers was speeding. About 1,000 fatalities resulted from speeding-related motor vehicle traffic crashes every month.

Composting - . its recycling…. naturally. compost. what is composting?. using the natural process of decay to change

Composting - . it’s recycling…. naturally. compost. what is composting?. using the natural process of decay to change

Motion and Forces - . displacement in time and space. focus questions. all animations: www.exrx.net. what is motion? how

From OODL Interpreters to VM’s and Beyond - . jonathan bachrach mit ai lab. outline. material mostly from “lisp in

Composting - . it’s recycling…. naturally. compost. what is composting?. using the natural process of decay to change

Vectorized Code - . chapter 5. vectorized code: speeding up matlab. loops are common in most programming languages plus

Gender Differences - . testing gender differences. get a sheet of paper and ask yourself this question – what are some

The ABC’s of Connecting With the Child of Divorce By Linda Ranson Jacobs - . introduction. like a speeding bullet,