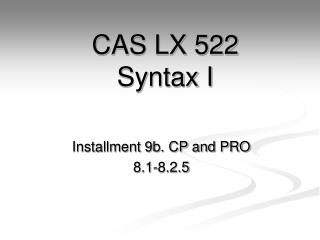 CAS LX 522 Syntax I. Installment 9b. CP and PRO 8.1-8.2.5. Types of sentences. Sentences come in several types . We’ve mainly seen declarative clauses . Horton heard a Who. But there are also questions ( interrogative clauses )… Did Horton hear a Who? Who did Horton hear? Introduction to LC-3 Assembly Language - . lc-3 assembly language syntax. each line of a program is one of the following:

A Little Journey in the Smalltalk Syntax - . goal. lower your stress :) show you that this is simple. appetizer!. yeah!

CAS LX 522 Syntax I - . week 15a. reprise. starting over. let’s take a tour of the system from the beginning, to help

Syntax and Backus Naur Form - . how bnf and ebnf describe the grammar of a language. parse trees, abstract syntax trees,

CAS LX 522 Syntax I - . week 5. head movement. x-bar parameters. many (most?) languages of the world have something like