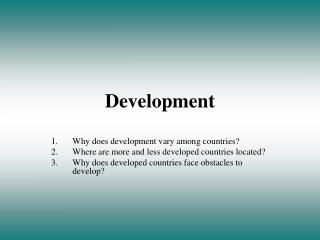 Development indicators - . and what they tell us? aphg – keller 2011. what does development look like?. what does

Development - . chapter 10. key question:. how do you define and measure development?. awesome. development. “the

Understanding personal development and relationships - . the stages and pattern of human growth and development. physical

How you can increase more sales via ecommerce website - Gr brains technologies is an ecommerce development company. we