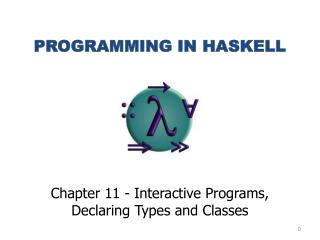 PROGRAMMING IN HASKELL. Chapter 11 - Interactive Programs , Declaring Types and Classes. batch program. inputs. outputs. Introduction. To date, we have seen how Haskell can be used to write batch programs that take all their inputs at the start and give all their outputs at the end.

A taste of Haskell - . simon peyton jones microsoft research. the challenge. “we are in the middle of the most

Introduction to Programming in Haskell - . chalmers &amp; gu emil axelsson and john hughes (with thanks to koen

CSC 202 Computer Programming - . what is program ? program is a set of instruction that a machine follows. what is

Functional Programming - . special thanks to scott shawcroft, ryan tucker, and paul beck for their work on these slides.