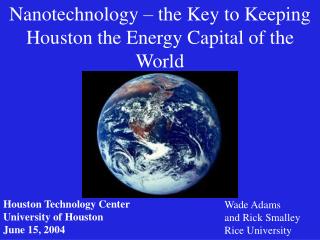 Nanotechnology – the Key to Keeping Houston the Energy Capital of the World - . houston technology center university of

Nanotechnology - . “using the pictures as a guide, what do you think might be the meaning of nanotechnology?” .

Research Programs on Nanotechnology in the World (Americas, Asia/Pacific, and Europe) - . rational you itri-iek-nems

Nanotechnology for Energy - . fuel cell applications. the membrane in the middle may be made of nanoparticles to improve