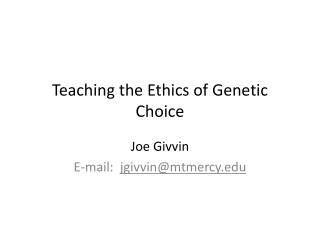 Teaching the Ethics of Genetic Choice

Teaching the Ethics of Genetic Choice

Genetics and Ethics What would you do? - . annette cashmore. www.le.ac.uk /genetics/genie. information about genetic

Teaching the Ethical Foundations of Economics - . lesson 3: do markets need ethical standards? the students play the

Social and Ethical Issues Towards Genetically Modified Foods - . presented by: maram murad. did you know that most of our

The Leader as an Individual - . “it begins with the natural feeling that one wants to serve, to serve first. then