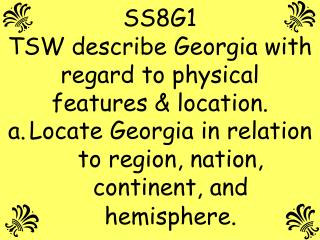 SS8G1 TSW describe Georgia with regard to physical features & location. SS8G1 TSW describe Georgia with regard to physical features & location. Locate Georgia in relation to region, nation, continent, and hemisphere.

SS8G1 TSW describe Georgia with regard to physical features & location.

Introducing the Oracle Database 11 g SQL and PL/SQL New Features - . objectives. after completing this lesson, you should

Wireless LANS &amp; PANS - . lecture # 3. differences between wireless and wired lan. address is no equivalent to

PHYSICAL FEATURES OF INDIA - . made by n.srinivasarao.

Geography of Georgia - . review. which statement describes georgia ’ s relative location? a. georgia is a

Lecture 6 - Nonetheless, physical location is at least an essential property if not a part of the ... location and