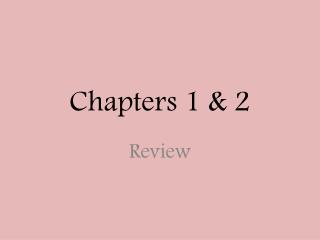 Chapters 1 & 2. Review. Question: Why is it important to study history? Please provide three reasons. Answer: To learn from the past To not repeat mistakes To learn about other cultures, religions, backgrounds, etc. Because history can be fun To learn interesting stories.

Chapters 1 to 4 - . 1. what plot exposition does shelley offer the reader in these chapters? shelley provides the reader

Chapters 1 - . introduction to chemistry. chapter outline. what is chemistry?. materials of the universe can be of

Part One: Chapters 1-4 - . who is telling the story? when and where does the story take place? what has changed hugo