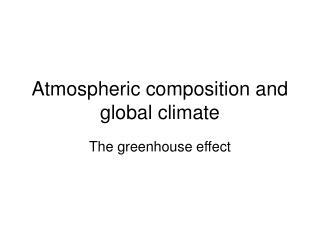 Word-Composition - . word-composition is a productive type of word-building, in which new words are produced by

Climate - . chap. 2 introduction i. forces that drive climate and their global patterns a. solar input – earth’s

Global Warming - . so what? . december 2013 . climate changes without humans . climate has been changing for hundreds of