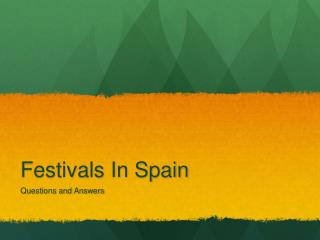 Festivals In Spain. Questions and Answers. What are the five biggest festivals in Spain? Describe them all and include when, who, why, where and what.

CATALONIA - . spain. we are more than 7 milion catalans. the capital city is barcelona. catalonia is about 32000 km².

Age of Exploration - . line of demarcation established in the treaty of tordesillas as a result of the rivalry between

Rites and Festivals - . holidays: times for communal involvement. rites. circumcision of the male child at 8 days. the

BILINGUALISM AND DIGLOSSIA IN SPAIN - . defining individual bilingualism. what is bilingualism? definitions: weinreich

Doing Business in Spain - . montreal, 22 nd may 2008. invest in spain: economy, business and advantages for canadian