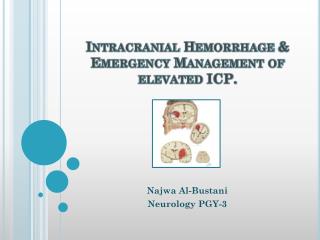 Intracranial Hemorrhage & Emergency Management of elevated ICP. Najwa Al-Bustani Neurology PGY-3. INTRACEREBRAL HEMORRHAGE:. Bleeding into the parenchyma of the brain that may extend into the ventricles and, in rare cases, the subarachnoid space. LOCATIONS. Subcortical/lobar: 20 %. Emergency Childbirth - . silver cross ems emd ce november 2011. what to ask?. what to do?. from an emergency