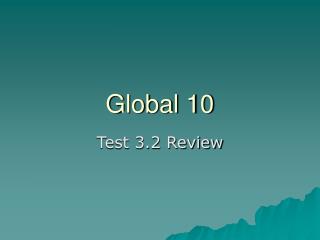 Global 10. Test 3.2 Review. Marshall Plan. Plan whose purpose was to help Europe rebuild after WWII. Cold War. The name for the ideological competition between the US and USSR: Democracy vs. Communism. Nuclear. Concern for this type of war deterred the US and USSR from engaging in battle. Managing in the Global Environment - . chapter six. learning objectives. explain why the ability to perceive, interpret,