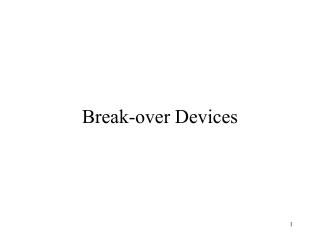 Break-over Devices. Introduction. As in SCR gate control, using breakover device will overcome the firing inconsistency from one device to another and the temperature independency. In addition, it will deliver a pulse of gate current rather than sinusoidal as RC circuits does. 1. The Diac. Technologies Used Over The Break - . by: parm randhawa. television. like any other human being on the planet, i managed

Homework (over the Winter Break) - . go to the app store and download the free app called autodesk digital steam visual

What Your Professors Did Over Break - . dr. book . dr. book spent break as he spends most of his free time…. the

What did you do over break? - What questions do you have about the sex linked, multiple alelle problems?. traits and

10 TECHNOLOGIES I USED OVER THE WINTER BREAK - . by:hardeep heer. car/truck. i used my suv to get around from place to

break - 1: introduction. break. beginning. in the very beginning. living world is very distinct from the rest of the

break - . break. you can break something, like a pencil. you can take a break when you are tired. . hair. hare. the hare