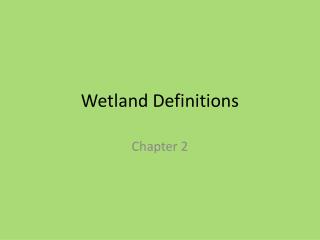 Wetland Definitions. Chapter 2. Features of Wetlands. All wetlands, by definition, have some level of standing water for some period of time. Wetlands must also have vegetation which can tolerate water saturation for extended periods of time (like Cyprus trees here in LA) Wetland Ecosystems - . grade 5 science. what is a wetland?. a wetland is an area with both dry land and land that is

Wetland Creation - . why? can it be done? does a created wetland serve the same ecological purposes as a natural

Wetland Soils - . definition of soil. a collection of natural bodies, made up of mineral and organic materials, that

Wetland Habitats - . the two species we have already looked at live in natural woodlands. the next two organisms live in