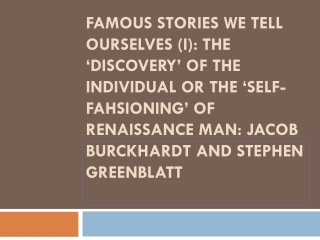 Lecture 2 Famous Stories we tell ourselves (I): The ‘Discovery’ of the individual or the ‘self- fahsioning ’ of Renaissance Man: Jacob Burckhardt and Stephen Greenblatt.

Week 6: Religious artefacts and the construction of religious meaning - . prayer. do you pray? what do people do when

Spiritual Formation - . lesson one : introduction to spiritual formation and the spiritual disciplines. spiritual

Definition of Spiritual Formation - . the intentional formal and informal process of giving god space in our lives to

Spiritual or Religious - . spiritual or religious. an important distinction exists between spirituality in religion and

Chapter 12: Religion - . the meaning of sacred meaning. soc 100. dr. santos. what does religion do for us?. meets basic

Spiritual and Psychosocial Care - . purpose: to present the resident as a whole person with physical, psycho- social, and