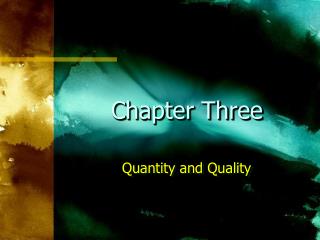 Chapter Three. Quantity and Quality. Chapter 3. Outline. Compares and contrasts the theories of endogenous vs. exogenous growth Main point: They differ less than you might think Tells the whole story in words and pictures leaving all the mathematics to appendices