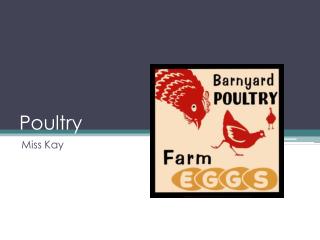 Poultry - . poultry. the term poultry refers to the rearing and breeding of avian species such as chickens, ducks,

POULTRY - The poultry industry. the most explosive meat industrythe first 6 months alone of 2005 broiler exports were up

Poultry - . chapter 14. poultry. includes any domesticated bird. chicken, turkey and duck are the most common. types of

Poultry - 21. poultry. you should be able to:. define poultry and list commonly purchased poultry products. explain the

Poultry - . chapter 18. after studying this unit. you will be able to: understand the structure and composition of

Poultry!!! - . basics. what is poultry???. poultry meat is domestic or wild fowl that is grown or harvested poultry is

Poultry - . by timothy tran and madeleine lebourveau. what is poultry?. poultry includes all domesticated birds that are