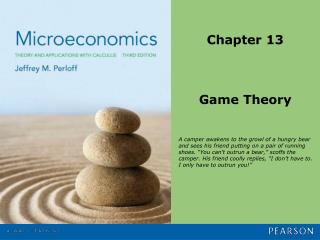 Chapter 13 Game Theory. A camper awakens to the growl of a hungry bear and sees his friend putting on a pair of running shoes. “You can’t outrun a bear,” scoffs the camper. His friend coolly replies, “I don’t have to. I only have to outrun you!”. Chapter 13 Outline.

Game Theoretic Rivalry: Best Practice Tactics Chapter 13 - . greater attention in business is being given to tactics and

Chapter 13 Retailers, Wholesalers and Their Strategy Planning - . at the end of this presentation, you should be able

Game Theory - . part 1: introduction and types of games. what is game theory?. game theory is the study of the strategic

Game Theory - . “ if it’s true that we are here to help others, then what exactly are the others here for? ” -