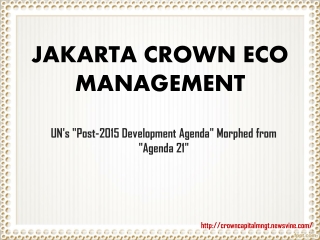 UN'S "POST-2015 DEVELOPMENT AGENDA" MORPHED FROM "AGENDA 21" “The hurried Chinese customer was angry and raising her voice. She was demanding in broken English why the girl behind the cosmetics counter could not understand her long shopping list written in Chinese. “You learn Chinese if you to survive,” she said. The girl’s eyes were brimming with tears at the abusive and rude treatment.” Read Article: http://www.design21sdn.com/people/109622/posts/23793 Related Stories: http://www.goodreads.com/group/show/81324-crown-capital-management-jakarta-indonesia http://forums.ebay.com/db1/topic/About-Me-Page/International-Crown-Capital/5100137440

“Partnership Arrangement and Means of Implementation on post-2015 Cambodia Development Agenda” - . 23 may 2014

Reflections on the MDG: Path to 2015 and the evolving Development Agenda beyond 2015 - . biplove choudhary undp

Lessons Learned from MDGs and the Post-2015 Agenda - . seminar ‘the way forward in poverty measurement’ geneva, 2-4