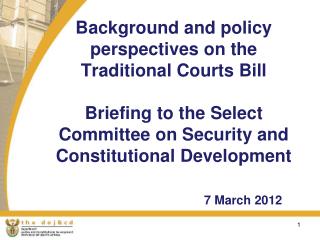 Structure of the Presentation B ackground and policy perspectives on the Traditional Courts Bill Briefing to the Select Committee on Security and Constitutional Development 7 March 2012. Structure of the Presentation. Historical Background of the Traditional Justice System (TJS)

Structure of the Presentation

Standing And Select Committee s On Finance And Appropriations 2014 MTBPS Program Workshop - . for an equitable sharing of

Update on Transversal Public Service Issues - . presentation to the select committee of co-operative governance and

DEPARTMENT OF LABOUR PRESENTATION TO THE PORTFOLIO COMMITTEE ON LABOUR - Workshop on budget review. 02 july 2014. 1.

DEPARTMENT OF LABOUR PRESENTATION TO THE SELECT COMMITTEE ON ECONOMIC BUSINESS DEVELOPMENT - Workshop on budget review.