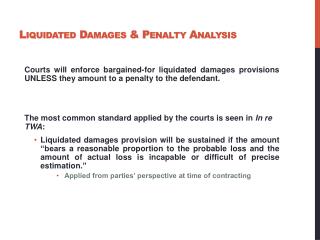 Liquidated Damages & Penalty Analysis. Courts will enforce bargained-for liquidated damages provisions UNLESS they amount to a penalty to the defendant. The most common standard applied by the courts is seen in In re TWA : Unit 20 Death and the Law - . what do following pictures make you think of ?. r.i.p. is an abbreviation for requiescat in

PENALTY - . chapter 5. penalty contingency. the immediate, response-contingent removal of a reinforcer resulting in a

Death Penalty - . trends. public support for the death penalty is diminishing in the u.s. roughly half the u.s. public

Penalized By Death - . by raeshon kelly. table of contents. what is the death penalty? the need of death penalty

Consequential Damages A refresher on consequential damages - . t.bowen 7 december 2011. purpose. the purpose of this