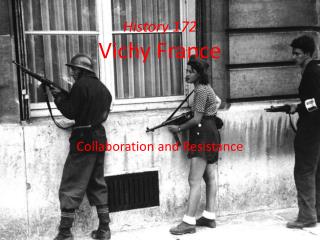 What is the history of France? - France is the largest country in western europe and the third largest in europe as a

The Fall of France - 1940 - . ltc oakland mcculloch. outline. the lead up to the battle the plans key points in the

Third French Republic - . after the fall of napoleon iii. i. national assembly: 1871-75. created with adolphe thiers as

Vichy France - . (or how to run an occupied country in war-time). battle of france. after taking poland, hitler set his

Czechoslovakia - . and the munich conference. the sudetenland. strong ties with germany, then part of austro-hungary and