A Sport and a Pastime - PowerPoint PPT Presentation 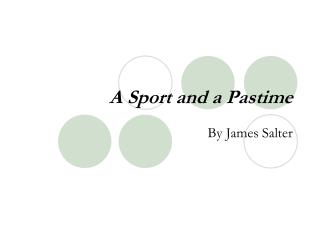 A Sport and a Pastime

A Sport and a Pastime

Discovering Etruscan and Greek Influences on Roman Civilization - . introduction you will be viewing a series of slides

About my Hobby And My Skill - . my skill. cooking is my best skill because cooking is easy to learn next is macromedia

How do you spend your free time? - . what do you do after school? what are your pastimes ?. spare. free. leisure. time.

FOOTBALL IN BRAZIL - . charlotte dorey. introduction. football is the most popular sport in brazil the brazilian national

Parallel Structure - . when combining several ideas into one sentence, balance must be created in a sentence. this means

What did the chemist yell when she passed a cute guy in her sports car? - . radon, baby!. balancing redox equations. use

Skill in Sport - . introduction. why do we play sport? why do we watch sport? what’s the positives &amp; negatives

Falcons and Falconry - . school links programme . a falcon is a bird. a bird has light, hollow bones no teeth and use

DISCUSSION TIME - . the pains of growing up . a sense of identity puberty maturing peer pressure coming of age crave

Discovering Etruscan Influences on Roman Civilization - . introduction you will be viewing a series of slides that