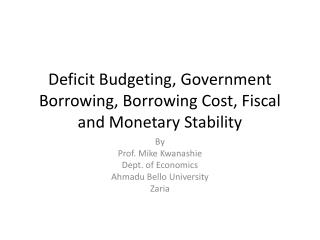 Budgeting - 21. budgeting. describe budgeting, its objective, and its impact on human behavior. 1. describe the basic

Budgeting - . fall 2011. introduction. tool for planning and controlling organizations. a budget is the quantitative

Chapter 4 Cost Control and Budgeting - . study objectives. at the end of this chapter students will be expected to:

Economic Policy - . today’s goals- be able to explain. gnp vs gdp monetary policy and how the fed reserve board carries