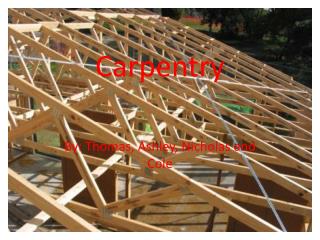 Carpentry. By: Thomas, Ashley, Nicholas and Cole. BRIDGING. Wood or metal members that are placed between trusses and joists in an angled position intended to spread the loads. EAVE. The edge of a roof projecting over the outside wall of the house. FASCIA. carpentry - David and brad. carpentry. tail joist. a short beam, joist, or rafter, which is supported by a header joist

Carpentry - Let your guests swoon in admiration with the beautiful carpentry showcased in your house. contact af

Carpentry - . by: chase carr. carpenter. carpenters build houses, buildings and just about everything around you today.

Carpentry - Rob w. nye. carpentry. why i chose carpentry. i am good at it i like being outdoors i like to work with my

Carpentry - . watch and describe oral production. tools. the handsaw is one of the most common tools for a carpenter

Carpentry - . grades of lumber and plywood . hardwood or softwood hardwood comes from deciduous trees such as oak, birch,

Carpentry - . green application 5. key lessons from carpentry. in carpentry , we learned about: tool and equipment use,