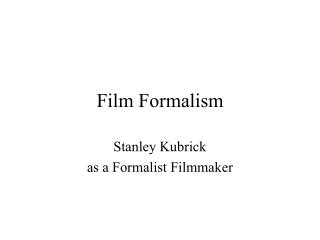 Formalism - . what’s the fun?. formalism, but not “form” alone. that absolute music has neither representational

‘Untitled’ - . by qila gill. formalism. formalism dictates that works of art are exclusively self-referential and

Hamiltonian Formalism - . eric prebys , fnal. motivation. we have focused largely on a kinematics based approach to beam

Poetic Realism in Film - . 1. poetic realism was a film movement in france of the 1930s and through the war years. its

Imitationalsim Emotionalism Formalism - Theories of art what is the purpose of art? art historians have looked at the

Film Aesthetics: - . formalism and realism . a single man by tom ford. is film an art form? . why or why not? . shutter

Narration and the Fiction Film - . three approaches to the problem of narrative as representation : considering the