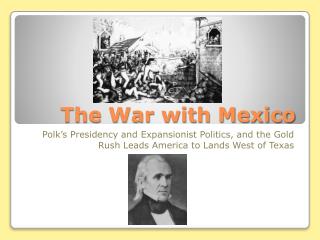 The War with Mexico The War with Mexico. Polk’s Presidency and Expansionist Politics, and the Gold Rush Leads America to Lands West of Texas.

The War with Mexico

DOING BUSSINES IN MEXICO - . www.psdconsultores.com. why invest in mexico?. 1. strategic location to be located next to

Civic Education and Political Empowerment in Mexico - . introduction. progression of interests on this topic purpose of

RENEGOTIATING GENDER IN THE BERRY FIELDS OF MICHOACÁN, MEXICO - . the transition from a male-dominated agricultural

CAUSES AND EFFECTS OF THE MEXICAN WAR 1846-1848 - . causes of the mexican war. a major cause was “manifest destiny”