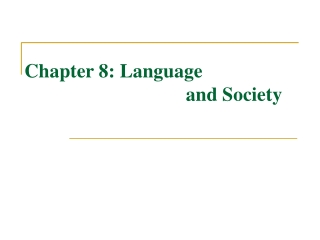 1. The scope of sociolinguistics. 2. Varieties of language. 3. Standard dialect. 4. Pidgin and Creole. 5. Bilingualism

PIDGIN AND CREOLE - . by alisa and miikkali 9b. what is pidgin?. pidgin (pidgin language) is a simplified form of

Language and Dialect - . lecture-2 iwanfauzi09@yahoo.com. what is language?. why language vary :. l anguages are always