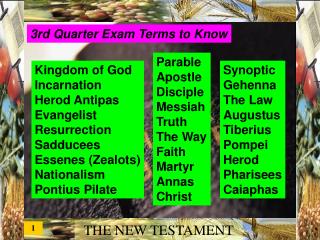 QUARTER TEST REVIEW 3RD QUARTER - . which of the following principles gives each branch of government the power to limit

3RD QUARTER PERFORMANCE REPORTING - Contents. summary of under achievement against targets and interventionspresentation

Terms to Know - . stagecraft i. geography of the stage. arbor. part of a fly system. a device mounted in one of the

Terms to Know - . bank reserves: currency held by banks in their vaults plus their deposits at federal reserve banks.

Terms to know - . labor = human activity that produces a good or service. mark-up: an amount added to the cost of an item

Terms to Know - . how style affects an argument. asyndeton. asyndeton- omission of conjunction between coordinate

Terms to Know - . gascon – a person from gascony, an area in the south west of france. cyrano is from this area .

Terms to Know - . fiction. a text that is not real. point of view. who is telling the story. 1 st person – character is

Terms to KNOW! - . ap english. anecdote. a very short story told to make a point. apostrophe. after the lady’s car

Terms to Know - . acting techniques i. a male or female person who performs a role in a play. actor. a person or