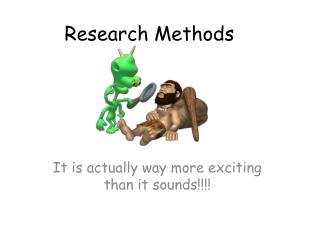 Research Methods. It is actually way more exciting than it sounds!!!!. Why do we have to learn this stuff?. Psychology is first and foremost a science. Thus it is based in research. Before we delve into how to do research, you should be aware of three hurdles that tend to skew our logic.

Research Skills - . lo: how can i gather research quickly and effectively? starter: what methods of research do you

Criminology Today - . chapters 3 and 4. chapter 3: where do theories come from?. overview criminological research