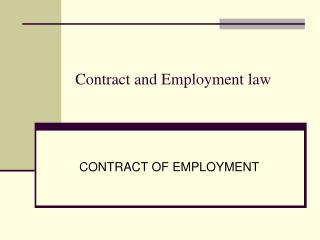 Contract and Employment law. CONTRACT OF EMPLOYMENT. What is the contract of employment. The importance of the employment contract The distinction b/n an employee and an independent contractor; Tests used by the courts/tribunals to interpreter this distinction;

Contract of Lease - . definition: a contract where one party (lessor) grants to another party (lessee) the temporary use

Sale Of Goods Act 1930 - . section 4 – sale and agreement to sale. the contract of sale of goods is a contract whereby

Employment Relationships -Agency - . chapter 14. chapter issues. the nature of an agency relationship creation of an