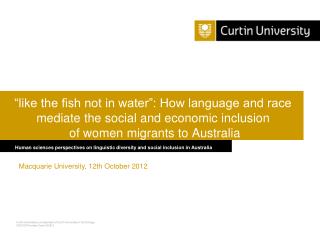 “like the fish not in water”: How language and race mediate the social and economic inclusion of women migrants to Australia. Human sciences perspectives on linguistic diversity and social inclusion in Australia. I ntroduction.

Outlining an anthropological perspective and the theories that will be discussed - . dr. zubeeda quraishy department of

Multiculturalism In Australia - . by vanessa locke, dina danias, katie glynn and jacqueline rogers. what is

Understand the concepts of equality, diversity and rights in relation to health and social care - . it is really

Roma and Egyptians in Albania: From Social Exclusion to Social Inclusion - . or the gold coin dilemma key findings