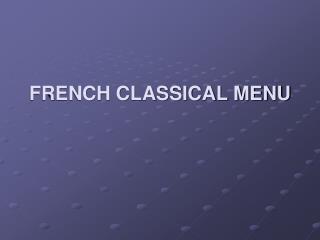 WALT: UNDERSTAND AND CREATE A RESTAURANT MENU IN FRENCH - . wilf: accurate use of the words “au”, “À la”,

Classical - . 1750-1820. ideas of reason, nature, and morality were reflected in the form and structure of music melody

MENU - . select from the topics below . overview. ipv and sexually transmitted infections/hiv . ipv and perinatal