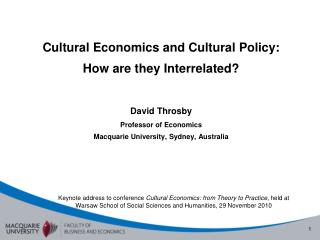 Cultural Economics and Cultural Policy: How are they Interrelated? David Throsby Cultural Economics and Cultural Policy: How are they Interrelated? David Throsby

CULTURAL - . reading section. warm up. do vietnamese people often use their first name or last name when addressing

CULTURAL METAPHORS – WHAT THEY ARE - Culture - a set of shared meanings identified by customs and artifacts. metaphor

Cultural Diversity, Cultural Adaptation and Cultural Change - . what is culture?. culture - all of the shared products of

Cultural Origins and Cultural Change - . what are the origins of our culture? how does a country’s history shape its

Cultural - . *woman athletes and portrayal *pride and province. 1920’s to

Cultural - Considerations. ethnopharmacology- the study of the effect of ethnicity on drug responsesdrug polymorphism-

Cultural Differences, Cultural Understanding, Cultural Unity - . each of us shines in a different way, but this

Cultural Dimensions of Values: What They Are and Why They Are Important - . lilach sagiv the hebrew university of