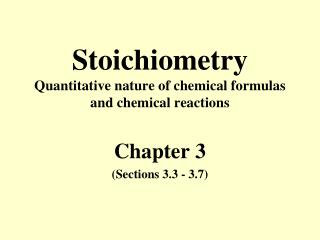 Stoichiometry Calculations with Chemical Formulas and Equations - . the mole. mole -the number of c atoms in exactly 12.0

Stoichiometry - . chemistry 6.0. the mathematics of chemical reactions: stoichiometry. i. balanced chemical equations a.

Chapter 3 - Stoichiometry Average Atomic Mass - . many elements have a # of naturally occurring isotopes. their atom

Stoichiometry and the mole - . what is stoichiometry?. quantitative aspects of chemistry stoicheon greek root (element)

Chapter 12 Chemical Quantities - . 12.2 using moles. warm-up: making a sandwich. how many sandwiches?. what is

Topic 3 Mass Relations and Stoichiometry - . mass and moles of a substance. chemistry requires a method for determining