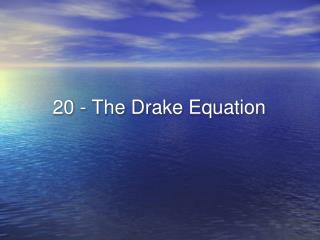 20 - The Drake Equation. There are many different ways to write it. In its simplest form:. There are many factors that go into R ic . We shall examine these in detail. The Full Form (one version):. R * = Rate of star formation ( Astronomy )

4-20. ONE EQUATION OR TWO? - In the previous lesson, you created one or two mathematical sentences that represented word

Life on Other Worlds - 0. life on other worlds. chapter 20:. 0. the physical basis of life. all life forms on earth, from

Life in the Universe - . stuff. lots of stuff. 100 billion+ star systems in the milky way new exoplanets being discovered

Is There Life Beyond Earth? - . section 6. warm-up. how many students got an “a” in marking period 2 in 8 th grade

Is Anyone Out There? Solving the Drake Equation - . a statistical approach. q: is there life beyond the earth? how many

Is There Life Beyond Earth? - . 20-6. extraterrestrial life. life from or on other planets. life not from this earth. a