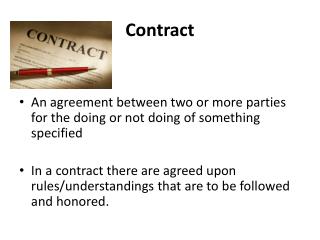 Contract. An agreement between two or more parties for the doing or not doing of something specified In a contract there are agreed upon rules/understandings that are to be followed and honored. Criminal Law vs. Civil Law.

LAW OF CONTRACT -- The Contract Act 1872 - . contract the term ‘contract’ is derived from the latin word ‘

Chapter 2 Contract Law - . teaching aims and demands. the definitions of offer and acceptance requirements of an offer

Theme 3 : 4 Breach of Contract - . forms of breach of contract. party fails to honour his contractual obligations in the

CONTRACT LAW - ACCEPTANCE OF OFFERS - . at the end of this lecture you should have an understanding of: the

WHAT IS A CONTRACT ? - . agreement enforceable by law lawful proposal by one party and the other party must accept it

Contract Law - . what is a contract?. a contract is an agreement between 2 or more people to exchange something of value.

ES 2.00 UNDERSTAND CONTRACT LAW - . obj. 2.01 understand the elements and characteristics of a contract. elements of a